How We Made It In Spite of Ourselves

Many of our followers have asked us for a list of the voyages that the Free Gaza movement organized and ran. The following list as well as videos and other links describes our voyages from August 22, 2008 through Freedom Flotilla 11 in 2011. 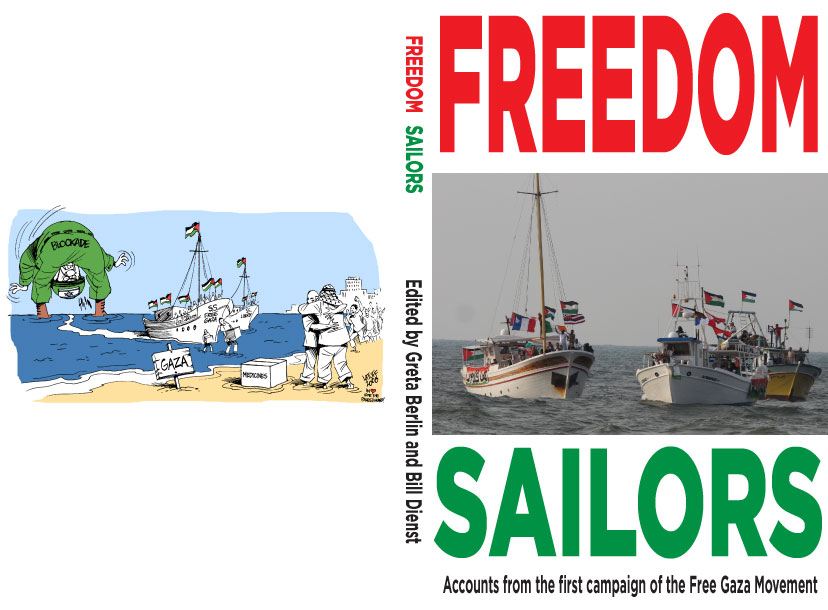 1st) August 23-29, 2008 - Our Historic First Voyage organized by the Free Gaza movement. 44 passengers from 17 countries sailed to Gaza and landed there successfully. http://www.freegaza.org/first-trip/

We have written a book about that first trip called FREEDOM SAILORS which can be ordered through Amazon. https://www.amazon.com/dp/B008Y65TSA/ref=dp-kindle-redirect?_encoding=UTF8&btkr=1

If you prefer to stay away from Amazon, you can also order through Good Reads. https://www.goodreads.com/book/show/15993465-freedom-sailors

Aki Nawaz and Yvonne Ridley also produced and directed this excellent film about that voyage.

2nd) October 28 - November 1, 2008 - The Second Breaking of the Siege organized by the Free Gaza movement. 27 passengers from 12 different countries came aboard for our second voyage to Gaza, including Palestinian legislator Mustapha Barghouti and Nobel Laureate Mairead Maguire. We landed at the port of Gaza successfully. http://www.freegaza.org/second-trip/

3rd) November 7-11, 2008 organized by the Free Gaza movement - Parliamentary Delegation of 24 passengers, including 11 past and present European parliamentarians, sailed with us on our third voyage to Gaza, along with over a ton of medical aid, and we landed successfully. http://www.freegaza.org/third-trip/

4th) December 8-11, 2008 - “Student” Delegation organized by the Free Gaza movement, and we sailed in successfully. Professors Mike cushman and Jonathon Rosenhead of BRICUP joined us for our fourth trip to Gaza, helping to bring out 11 university students who had been denied exit by Israel. http://www.freegaza.org/fourth-trip/

5th) December 19-23, 2008 - Qatari Delegation organized by the Free Gaza movement. On December 19, the Free Gaza Movement sucessfully returned to Gaza once again, this time with two envoys from the Qatari Eid charity. With this historic journey, Qatar became the first Arab nation to ever break the siege of Gaza. Alze Al-Qahtani, one of the Qatari envoys, declared: “This is just the beginning…” http://www.freegaza.org/fifth-trip/

It was to be the last successful boat trip into this besieged slice of Palestine.

6th) December 29/30, 2008 - The Ramming of the Dignity. Free Gaza organized this trip In response to the Israeli massacres in Gaza at the end of December 2008. We sent an emergency delegation into besieged Gaza. Aboard the ship were over 3 tons of medical supplies, 3 surgeons, Dr. Elena Theoharous, a member of the Cypriot Parliament, as well as Cynthia McKinney, a former U.S. congresswoman and Green party presidential candidate. The Israeli navy rammed our ship three times, almost sinking it. A CNN journalist, Carl Penhal was on board that trip and both he and Cynthia reported from the port in Lebanon where the ship was towed in. http://www.freegaza.org/sixth-trip/

7th) January 12-15, 2009 - The Spirit of Humanity made a maiden trip to try to enter Gaza again. Immediately following the ramming of the Dignity, the Free Gaza Movement secured a new boat, the Spirit of Humanity, and attempted another emergency mission to besieged Gaza. Aboard the ship were 36 passengers and crew, representing 17 different nations as well as journalists from several major outlets. The Israeli navy war ships forced the boat to turn back as they threatened to fire upon the unarmed civilians on board if they continued toward Gaza. The boat was facing high seas with the Israeli military doing its best to swamp it as it sailed toward Gaza in international waters. http://www.freegaza.org/seventh-trip/

8th) June 29-July 7, 2009 - Kidnapped by Israel. On June 29th, Free Gaza’s the Spirit of Humanity once again left for the shores of Gaza. On board were 21 journalists & human rights workers representing 11 different countries, including Nobel Laureate Mairead Maguire and former U.S. congresswoman and presidential candidate Cynthia McKinney. In addition to 3 tons of medical aid, the passengers were carrying symbolic gifts to Gaza, including crayons, toys, 20 olive trees, and cement and copper wiring to wire 20 homes that had been destroyed during Israel’s December/January massacre.

In the early morning of June 30th, in international waters, the Israeli Navy began to intimidate the crew and passengers, threatening to open fire if they did not turn around. After being tailed and threatened for 12 hours, the Israeli Navy sent Zodiacs loaded with ten commandos to board the boat. They hi-jacked the boat to Israel, abducting and arresting the 21 passengers, before deporting them all between July 3-7. Israel’s over-reaction & violent interference helped to raise awareness of the Gaza crisis all over the world. Over 40,000 news stories, essays, blog entries, action alerts, and radio and television segments were done on the plight of the passengers on board the Spirit of Humanity. Despite having no diplomatic relations with Israel and refusing to recognize the legitimacy of Israel’s government - the King of Bahrain personally & successfully intervened to force Israel to immediately release the 5 Bahraini prisoners kidnapped from the Spirit.

The General Secretary of the Arab League issued a statement. The Greek government formally intervened with Israel on the behalf of the Free Gaza passengers. Micheál Martin, Ireland’s foreign minister, issued a statement calling for the release of the prisoners as well as for an immediate end to the continuing Israeli blockade of Gaza. Richard Falk, UN Special Rapporteur on Human Rights in the OPT, issued a formal statement calling the seizure of the boat “unlawful,” and re-iterating the need to end the Israeli blockade. The British parliament scheduled a formal debate on Israel’s unlawful abduction of our passengers. And Tun Dr. Mahathir bin Mohamad, former prime minister of Malaysia, issued a statement calling on both the Israeli and American governments to release the prisoners and uphold international law by ending the Gaza siege. Israel has never returned the boat or the thousands of dollars of electronic equipment on board the boat. It was to become standard procedure after they illegally boarded our boat that Israel would begin to attack every boat sailing to Gaza, kidnap the passengers and tow them into Israel, to then be charged with entering Israel illegally.

The video below was shot by one of the passengers who was covering the voyage for “Rice and Peas. https://www.youtube.com/watch?time_continue=8&v=T0Hkz3t1pJ8&feature=emb_logo

9) After the attack on the Spirit of Humanity, the board of Free Gaza decided we could no longer just send one boat at a time to break Israel’s unlawful siege. We spent the next year organizing a flotilla, along with partners we talked into joining the initiative.

These partners included the Turkish charity, IHH, The European Campaign to End the Siege, the Malaysian initiative of Tun Mahatir and the Swedish/Greek effort. All of them contributed boats, supplies and passengers. This voyage was to become Freedom Flotilla 1. Please note that, although the Mavi Marmara ship was bigger than all the other boats put together, they were not leading the initiative; it was organised by the Free Gaza movement, which had the Challenger I in the flotilla and the Rachel Corrie cargo boat which sailed a few days later.

This voyage ended when Israel murdered ten civilians on board the Mavi Marmara and wounded passengers on all six boats, some of them seriously. Passengers were then kidnapped and taken into Israel and imprisoned, and over a million dollars of equipment was confiscated and never returned.

Many of the survivor testimonies can be found here: http://archive.freegaza.org/en/boat-trips/survivor-testimonies.html

As well as the brilliant film smuggled out by lara lee, one of our passengers on the Mavi Marmara. (https://www.youtube.com/watch?v=vwsMJmvS0AY)

The Free Gaza cargo boat, The Rachel Corrie was also brutally stopped less than a week later on June 4, 2010, just after the attacks on Freedom Flotilla I. They had tried to sail with the other six boats, but had been forced to pull into a port for repairs that appeared to be sabotage of their propeller. Once that happened, we decided to add more cameras to the boat in case of an attack. http://edition.cnn.com/2010/WORLD/meast/06/03/gaza.raid/index.html

10) The next flotilla, Freedom Flotilla II, Stay Human, included the USA Boat to Gaza, the Audacity of Hope, and other boats from other countries forming a coalition that included the Free Gaza movement. The flotilla was planning on sailing in the summer of 2011 but was sabotaged by Greece as Israel outsourced the occupation to it, demanding that all boats be prevented from leaving its shores.

Although one French boat did manage to escape and sail toward Gaza, it was hijacked by the Israeli navy, and its passengers hauled into Israel against their will. This behavior by the entity that insists on an illegal blockade of Gaza was to be repeated another dozen times between 2011 and 2016.

Since 2011, the Free Gaza movement has had no input on the other flotillas unless we are asked for our expertise, although we are supportive of their efforts and continue to post information and raise money for them.