Palestinians call for release of Italian activist kidnapped in Gaza

[April 14, 2001] Today, our friend and colleague, Vittorio Arrigoni, a journalist and human rights defender working in the Gaza Strip, was kidnapped by Salafists, members of a very small extremist group in Gaza. 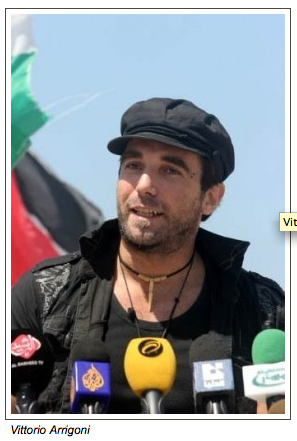 Vittorio has been active in the Palestine cause for almost 10 years. For the past two and a half years, he has been in Gaza with the International Solidarity Movement, monitoring human rights violations by Israel, supporting the Palestinian popular resistance against the Israeli occupation and disseminating information about the situation in Gaza to his home country of Italy. He was aboard the siege-breaking voyage in 2008 with the Free Gaza Movement and was incarcerated in Israeli prisons several times. He was in Gaza throughout Israel’s brutal assault (Operation Cast Lead), assisting medics and reporting to the world what Israel was doing to the Palestinian people. He has been arrested numerous times by Israeli forces for his participation in Palestinian non-violent resistance in the West Bank and Gaza. His last arrest and deportation from the area was a result of the Israeli confiscation of Palestinian fishing vessels in Gazan territorial waters.

Vittorio frequently writes on the issue of Palestine for the Italian newspaper, IL Manifesto and Peacereporter. Additionally, he maintains a popular blog (http://guerrillaradio.</wbr>iobloggo.com) and facebook page (http://www.facebook.com/</wbr>pages/Vittoriatio-Arrigoni/)

Khalil Shaheen, a friend of Vittorio and Head of the Economic and Social Rights Department at the Palestinian Center for Human Rights said, “This is outside of our traditions. We are calling for the immediate release of my best friend. Vittorio Arrigoni is a hero of Palestine. He was available everywhere to support all the poor people, the victims. I’m calling on the local authorities here in Gaza, and all security departments, to do their best to guarantee his safety and immediate release.”

Vittorio was granted honorary citizenship for his work on promoting the cause of the Palestinian people. Members of Gazan civil society are demanding his release; tomorrow at 4:00pm there will be a mass demonstration in Jundi Square.