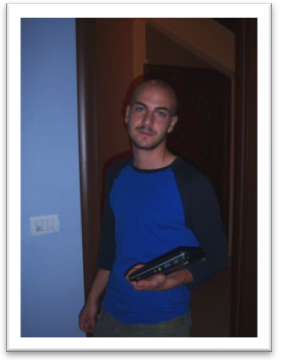 Davide studies Political Science in Milan and is a journalist. He has worked in the journalism since he was 20 years old. Before going to live in Turin, he wrote for a local journal near Milan; now he works for Narcomafie, a magazine distributed throughout Italy.

He has lived in San Sebastiano da Po since last year to participate with three other people in the project for the social re-use of mafia property. The house where he lives is a property confiscated from Belfiore's family, a powerful Piedmontese clan. One of the inhabitants of this house was Domenico Belfiore, a boss of the 'ndrangheta who was condemned to life imprisonment as the instigater of the murder of Bruno Caccia, a judge killed in 1983.

He says, "For my activity in magazine and social work, it is very important to participate in the Free Gaza trip. Libera, Acmos, and Narcomafie believe in the value of non-violent resistance, the respect of human rights, democracy, equality peace and freedom."