They parade in fear, their eyes looking upwards, surrendering to the sky showering terror and death upon them, fearing the earth that keeps shaking under every step they take, opening craters where there were houses, schools, universities, markets, hospitals, and burying their lives within them forever. I've seen caravans of desperate Palestinians evacuate Jabalia, Beit Hanoun and all the refugee camps in Gaza, crowding the United Nations' schools like earthquake survivors, like victims of a tsunami which is eating into the Gaza Strip day by day, along with its civilian population, without pity or compliance with human rights and the Geneva Conventions. Most of all, without a single Western government stirring a finger to stop this massacre, or sending medical staff out here, or stopping the genocide that Israel is smearing its hands with in these hours.

The indiscriminate attacks against the hospitals and medical staff continue. Yesterday, after having left the Al Auda hospital in Jabalia, I received a call from Alberto, a Spanish colleague at the ISM - a bomb had been dropped there and Abu Mohammed, a nurse, had been seriously injured to his head. Just moments before, in front of a café, I'd been listening to his stories of the heroic deeds of Communist Abu Mohammed's heroes, the leaders of the Popular Front: George Habbash, Abu Ali Mustafa, Ahmad Al Sadat. His eyes lit up when he heard that the first notions of what Palestine and its immense tragedy were, had been passed onto me by my parents, both Communists through and through. By my mother, a "raissa", or Mayor of a town in Northern Italy. He asked me who had been the truly revolutionary leaders of the Italian left from the past, and I said Antonio Gramsci. For those of today I took my time, telling him I'd have replied to that question today. But Abu Mohammed now lies in a coma, in the same hospital where he works. He spared himself my disappointing reply.

Towards midnight I received another call, from Eva this time - the building she was in was under attack. I know that building well, in the centre of Gaza City. I've spent a night there with some Palestinian photojournalist friends of mine. They try to capture through images and words something of the unnatural catastrophe we're enduring in the last ten days. Reuters, Fox News, Russia Today and many, many other local or foreign agencies were under fire by seven rockets shot by an Israeli helicopter. They managed to evacuate everyone on time before anyone was seriously injured - all those cameramen, photographers, reporters - all Palestinian, considering Israel won't allow any international journalists to set foot in Gaza. There are no "strategic" targets around that building, nor a resistance fighting off the deadly armoured Israeli vehicles, which can be found a way away towards the North. Clearly, someone in Tel Aviv cannot bear the images of the massacres of civilians clashing with the ones that the Israeli officers' briefings provide while offering the mercenary journalists their aperitif. Through these press conferences they're declaring to the world that the bombs' targets are only the Hamas terrorists, not those atrociously mutilated children we pull out of the rubble every day.

At Zetun, about ten kilometres from Jabalia, a bombed building crumbled over a family, leaving about ten victims. The ambulances had to wait several hours before they could reach the spot, as the military persist in shooting at us. They shoot at ambulances and bomb hospitals. A few days ago, while I was on the air with a well-known Milanese radio station, an Israeli "pacifist" clearly spelt out to me that this was a war where both sides used all the weapons at their disposal. I thus invite Israel to drop one of its many atomic bombs upon us, those they keep secretly stashed away, defying all treaties against nuclear proliferation. Why not just drop that decisive bomb of theirs and put an end to the inhuman agony of thousands of bodies, lying in tatters in the overcrowded hospital wards I visited?

I took some black and white photos yesterday, the caravans of mule-drawn carts, overloaded beyond belief with children waving white drapes pointing skywards, their faces pale and terrified. Looking through those snaps of fleeing refugees today, I felt shivers down my spine. If they could only be superimposed with those witnessing the Nakba of 1948, the Palestinian catastrophe, they would be a perfect mirror image of them. The cowardly passiveness of self-styled democratic states and governments are responsible for a new catastrophe in full swing right now, a new Nakba, a brand new ethnic cleansing befalling the Palestinian population.

Until a few moments ago we counted 650 dead, 153 murdered children, in addition to 3,000 injured, and innumerable missing. The number of civilian deaths in Israel has thankfully stopped at 4. But after this afternoon the death toll on the Palestinian side requires an urgent recount since the Israeli Army has started attacking the United Nations schools. The very same that had been offering shelter to the thousands evacuated under threat of an imminent attack. They chased them off the refugee camps, the villages, only to collect them all in one place, an easier target. Three schools were attacked today, the last being at Al Fakhura, in Jabalia, which was hit full on its head. Over 80 dead. In a heartbeat, men, women, elderly people and children were wiped away, believing themselves to be safe within those blue-tinted walls adorned with a UN logo. The other 20 UN schools are now shaking in fear. There's no way out anywhere in the Gaza Strip. This isn't Lebanon, where the civilians in the Southern villages targeted by the Israeli bombs could flee to the North, or to Syria or Jordan. From one enormous open-air prison, the Gaza Strip has become a deadly trap. We look at one another in bewilderment and ask ourselves whether the UN Security Council will finally unanimously condemn these attacks after their own schools have been targeted. Someone out there has really decided to turn this place into a desert, and then call it peace.

A long night on the ambulances awaits us now, even after dawn has become an illusion around here. Antenna towers for our mobile phones all along the Strip have been destroyed and we've stopped relying on them. I hope I may one day be able to see all the friends I can no longer contact, but I'm under no illusions. Everyone bar none in Gaza is a walking target.

The Italian Consulate has just contacted me, saying that tomorrow they shall evacuate a fellow Italian, an elderly nun who'd lived near the Catholic church in Gaza for the last twenty years, and had by now been adopted by the Palestinians in the Strip. The consul gently urged me to seize this last opportunity and escape this hell with the nun. I thanked him for the offer, but I'm not moving from here - I just can't. For the sake of the losses we endured, before being Italian, Spanish, British or Australian, right now we are all Palestinian. If only we could do that for just one minute a day, the way we were all Jewish during the Holocaust, I think we would have been spared this entire massacre.

(Translated from Italian by Daniela Filippin) 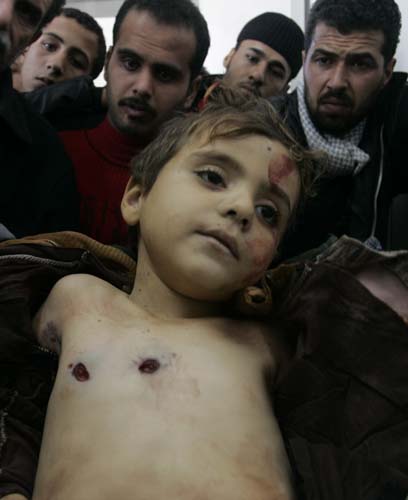