We Succeeded Because We Never Lost Sight

Mary Hughes Thompson and I were sitting in the Knight’s Palace in 2005 when Sharon pulled the illegal Israeli settlers out of Gaza. We watched with such joy as they were shoved, pushing and yelling, onto buses and forced to leave Gaaza. Israel loudly proclaimed to the world that Gaza was free.

Within days, dozens of us who had volunteered for the International Solidarity Movement began coming up with ideas on how to get to Gaza. Five of us, all graduates of ISM direct-action decided we’d call their bluff and organized the first flotilla of boats…ok It was two boats…to sail to Gaza. 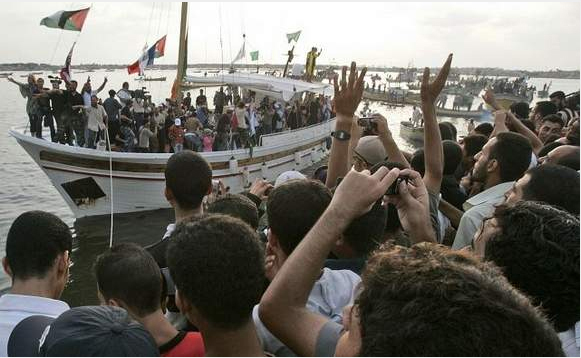 After all, Gaza was now free, and we didn’t have to ask Israel for permission…and we didn’t.

It took two years of planning. We raised over a $700,000 to buy two dilapidated fishing boats, then started to invite passengers once we knew we actually had boats. 85 people applied, and we took 44 activists from 17 nations and boarded the boats in Cyprus

We succeeded because we had a tight-knit core who we already trusted as we’d worked with the ISM. In fact, the majority of passengers were graduates of the ISM

We succeeded because we never lost sight that our objective was to sail to Gaza, in spite of infighting.

We succeeded because the organizers of Free Gaza all had specialties that fit what we needed. Mary was the banker and took care of all the money, making sure everyone was thanked and every cent was accounted for. I had 35 years of experience in the media, so I was in charge of media relations. Paul had dozens of contacts, spoke pretty good Arabic and Greek and was in charge of the Greeks, Sharon was in charge of passengers on the boats, and Renee was our stage manager. We literally saw what we were doing as a huge production, with actors, sets, lights, protagonists and antagonists and opening night… which kept getting postponed.

We succeeded because three of us organizers were over 65, had run our own businesses and didn’t need to be paid. And we were American. No matter how much I despise our government actions toward Palestine, there is one thing to be said about us Americans. We are the eternal optimists. This direct action never would have gotten off the ground in many other countries because they are too realistic. We were not.

Frankly, we succeeded because Free Gaza was mostly run by women, and we were more prone to delegating and listening.

Musheir Al Farah, one of the Palestinians from Gaza wrote this piece about our first landing. He reminds us all the time why we went and why we continued.

As Gaza started to appear on the horizon, I felt ecstatic; I just could not believe it. I never expected it. After all the threats, I thought we would end up in an Israeli prison. I could not stop my tears. At last, I will be able to visit my mother, Laila’s grave. Laila who always said to people around her, even when she was in good health, “If I die, please tell Musheir that the last words on my lips were his name.”

Yet I couldn’t be at her bedside when she was dying in the hospital where I was born, because of this inhuman and illegitimate siege. My tears continued. Greta was standing next to me. She hugged me, and, in a very emotional voice said, “Musheir, these moments can never be taken away from us.”

No ships had docked in Gaza Port since 1967 and I could see Gaza clearly.: “There is the Beach Camp, there is Omar AL Mukhtar streets. I can see Al Shohada Street. The port is there, right in front of us.” We had reached Gaza against all the odds. 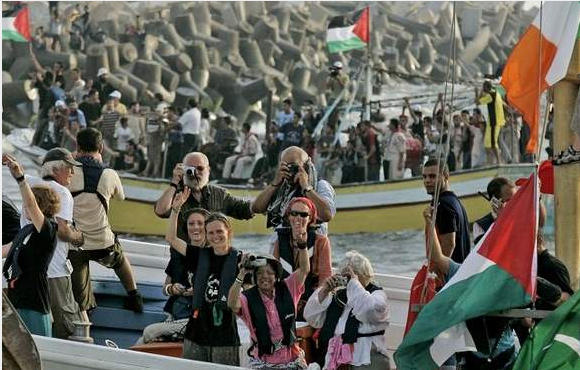 Without a doubt our arrival was a breath of freedom and hope for the people of the Gaza strip. The thousands waiting for us, everyone in the Gaza Strip, felt a sense of pride during those euphoric moments. It was a feeling of dignity that comes from defiance when much of the world, including Arab regimes, turns a blind eye to the Palestinians’ suffering. Even if we had only achieved a few moments of triumph for the people, this would have been a good enough cause.

On the morning that our boats were due to depart from Gaza port, I woke up very early and went to Khan Younis cemetery to visit my mother’s grave. It was the first time I had visited the grave. I spontaneously found myself talking to my mother. I couldn’t stop my tears, saying,

Mother, I am here. I am visiting you despite their siege.” I used to joke with my mother. “Do not die when I cannot be with you.” She would laugh and say, “Don’t worry, I will not if you promise to place me in my grave with your own hands.” I had promised to do that but was unable to.

It was a great feeling, a feeling of freedom that I had never experienced. It was the first time in my life that I had visited home without the humiliation of being questioned or interrogated by the Israelis, without being threatened, having my travel documents thrown in my face, and not knowing whether I would be able to get out or not.

It’s a sense of liberation I hope every Palestinian will experience one day. I’m proud of being the first Palestinian from the Occupied Territories to enter Palestine without Israeli permission since 1967.

Our first trip on August 23, 2008, 14 years ago, was a resounding success. No one thought we’d do it, but we did. The Israelis didn’t know what to do with us, because we called their bluff that Gaza was free. They called us ‘aging hippies,’ and sneered at our boats. We took everything they said to us, put it in a press release and sent it out. The closer it got to our sailing, the more media finally paid attention. We were doing something different.

Our successes were certainly more than I’ve listed. But what about the obstacles? They were legion, of course. If I can offer any advice to anyone doing direct action, it’s to stay focused on what you’re doing, have a clear-cut strategy that the media can understand, keep the main organizers to 5 or fewer and completely trust each other.

So, here is a list of just some of the obstacles we faced.

But our success when I look back on it was, literally, because so many of us had faced Israeli settlers and the military when we worked in the occupied West Bank, and nothing…nothing…was going to stop us. We’d already been shot, tear-gassed, arrested and some of us deported. The more they pushed, the more we pushed back.

https://www.amazon.com/Freedom-Sailors-movement-succeeded-ourselves-ebook/dp/B008Y65TSA/ref=sr_1_1?keywords=freedom+sailors&qid=1661204364&sr=8-1 24 of us wrote a book called “Freedom Sailors,” about that first trip And Aki Nawaz, one of the people on board made a movie called “To Gaza with Love.” https://www.youtube.com/watch?v=g-8XIjATLZQ Some of the obstacles I haven’t even covered are in that film. 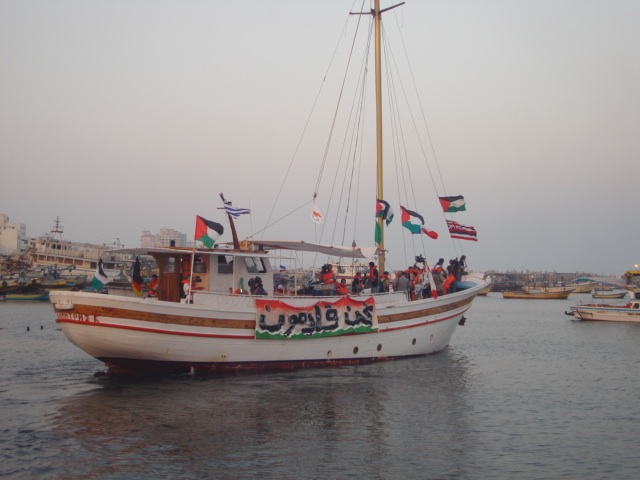 We were successful, because we were at the right time with the right crew and an indomitable spirit that wasn’t going to stop us once we got going.

And Musheir’s last words are the reasons the flotilla still sails, even though no boat has landed there since our last one in December 2008. It may not be easy to see whether direct action has actually made a difference, But it has. To date, Free Gaza sailed nine times and Freedom Flotilla has sailed 12 times. We have been stopped, brutally assaulted, our boats taken from us and passengers thrown into detention, then shipped out of Israel who says we entered illegally, even though we had no intention of ever going into Israel. We went straight from international waters into the waters of Gaza. It was Israel who was the illegal entity. Organizers are talking about another voyage in 2022 or 2023.

We thought up crazy ideas. We’d rent a cargo ship and put 5 or 6 hot air balloons inside, moor it off the coast of Gaza in international waters and hot air ourselves into Gaza. After all, Gaza Freedom Marches broke the siege by land, we broke the siege by water…why not by air?

Would it be possible to walk home? Fly home? Get on board boats and sail into Gaza? All at once? Is everyone willing to take that chance?

Direct action is one of the best ways of achieving that goal, because direct action works. People want to DO something that is tangible. It’s one of the reasons why Palestine Action has been so successful at closing down some of the Elbit sites in the UK. https://www.palestineaction.org/

“It is a sense of liberation I hope every Palestinian will experience one day. I am proud of being the first Palestinian from the Occupied Territories to enter Palestine without Israeli permission since 1967