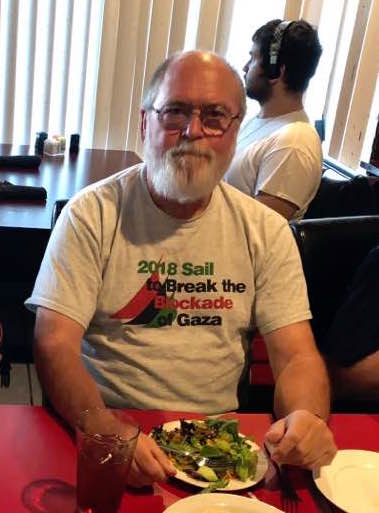 On June 8, 1967, U.S. Navy Signalman Joe Meadors was standing watch on the USS Liberty off the coast of Gaza. In an aerial and sea attack on the ship that lasted 90 minutes, the Israeli military killed 34 U.S. sailors and wounded 174. Signalman Meadors watched the Israeli military almost sink the ship, including Israeli forces machine-gunning lifeboats.

Fifty-one years later, on July 29, 2018, U.S. military veteran Joe Meadors witnessed another brutal Israeli military action, the violent takeover of an unarmed civilian ship Al Awda in international waters, 40 miles off Gaza. Al Awda is part of the four-boat 2018 Gaza Freedom Flotilla that began its voyage in mid-May from Scandinavia, and 75 days later arrived off the coast of Gaza. Al Awda arrived on July 29 followed by Freedom on August 3. The two other boats of the flotilla, the Filestine and Mairead Maguire, were unable to complete the voyage due to damages incurred during a storm off Sicily and maintenance problems.

Meadors said that on July 29, the Israeli Occupation Forces (IOF) appeared when the boat was 49 nautical miles off Gaza. He commented that there were six large patrol craft and four zodiac boats with stormtroopers onboard. Meadors said one group of crew and passengers protected the pilot house. The IOF commandos beat the captain of the boat, hitting him and knocking his head against the sides of the ship and threatening him with execution if he did not restart the engine of the ship.

Four crew members and delegates were tasered by IOF forces. One crew member was repeatedly tasered on the head and neck and a delegate was also tasered repeatedly. Both were in serious medical condition after repeated tasering and were only semi-conscious during the seven-hour trip to Ashdod

Renown orthopedic surgeon from the United Kingdom, Dr. Swee Ang, who is about 4 feet, 8 inches and weighs about 80 pounds, was hit on the head and body and ended up with two broken ribs.·