Every month we post a guest editorial. This month, the piece is by the renowned Palestinian, Jafar Ramini. He can be followed at https://www.youtube.com/watch?v=DX8Ex3Erfz0

Growing up in Palestine in the 50s our daily bread was the news of the exploits and achievements of our ‘fedayeen’ - our freedom fighters. Those who were risking their all with a minimum of training and very basic equipment to give the Israeli colonialists on our border sleepless nights.

I was fourteen when I volunteered to go through what was known as ‘the National Guard training’. I even learned the basic skills of handling a gun on an ancient rifle. Not that this training came to anything. What it did was add to my belief that what was taken by force cannot be regained with rhetoric and futile discussions and negotiations. I have lived by that notion ever since.

The Zionist/Apartheid regime in Palestine has proved me right over and over and over again. I always convinced myself that we Palestinians could withstand all that Israel could throw at us and that we would, eventually, prevail. That belief sustained me for most of my adult life, enhanced in the early 1960s by the birth of the properly organised ‘fedayeen’ - The Palestinian Liberation Organisation. Had it not been for my mother begging me not to I would have been there, in the trenches, with them.

You see, I grew up in Jenin with a daily reminder that the occupiers of our land were just there. I could see the lights of the Israeli kibbutz every night blinking at me; a constant reminder of our loss and humiliation.

But that was then. I left Palestine in 1962, got to know most of the operators, most of the men who founded the PLO and after living in London for 53 years I was always at the forefront of our political struggle. “This is the least I can do,” I said to myself. When Yasser Arafat came through London on his way back from that visit to the UN in 1974 I met him and though I was apprehensive over his famous speech about exchanging the gun for the olive branch I kept my council. I wish I hadn’t.

We met again in London in 1993 when he was on his way back from Washington after the signing of the shameful - and since proven to be very damaging - Oslo Accord. Once more, despite the rage in my soul, I listened to those around me and kept silent. Again, I wish I hadn’t. I went to Gaza for the first time in 1999 in an effort to give my fledgling country a helping hand when I came across the corruption and blatant self-serving by the officials I had the misfortune to meet. I went back home bitterly disappointed and decided that I would never be silent again. Not ever.

Those of you, Palestinians and supporters who have heard me speak or read any of my articles, will know that for the best part of 20 years I have never stopped criticising the PA (Palestinian Authority) or Hamas. I have called them both the enemies of Palestine ‘live’ on TV and I have called for the dissolution of the Palestinian Authority and the reconciliation between the forces of Palestinian resistance under one flag, for one purpose. The liberation of our land.

You don’t have to be Palestinian or even a supporter to see the enormous damage that in-fighting and the continuous charade of ‘peace negotiations’ with Israel has done to us. We spend more time, more effort arguing with each other instead of uniting against our enemy.

Gaza has been under tight siege for the last 13 years. Not only from Israel and Egypt but also from The Palestinian Authority. The two million Gazans, despite the inhuman conditions under which these extraordinary people live, still stand fast, refuse to give in and endure whatever is thrown at them. But, they are tired. They are exhausted. They need our support.

The people of the West Bank do not fare much better than their brothers and sisters in Gaza. Living under a relentless Apartheid occupation, every moment and aspect of their lives is controlled. They are imprisoned and tortured and their houses are demolished by the Zionist occupying forces at a whim. We have seen evidence of this, time and time again. But now their oppressors are not just Israeli soldiers but the very Palestinian security forces who are supposed to be there to protect them.

It’s not easy for me to say this, but what I just seen with my own eyes and heard with my own ears are first-hand accounts from witnesses which leave me in no doubt that the Palestinian Authority and its apparatus of so-called security enforcement is not actually for the benefit of Palestinians but is an alien force. Palestinian men and women trained and equipped by America and Israel to suffocate the life out of their own people for the benefit of its occupiers.

I spent most of last week and this weekend glued to my screen, listening to Palestinian journalists, lawyers, legislators, human rights advocates and activists regaling us with appalling stories of aggression and brutality by Palestinians on Palestinians. I never thought, in my deepest and darkest of nightmares, that I would see Palestinian security officers, both men and women, dragging Palestinian women by their hair, spitting on them and calling them names. But I did.

All this just two weeks after the activist, Nizar Banat was beaten to pulp and murdered by these same PA thugs simply for daring to speak the truth.   I saw demonstrations against the Palestinian Authority in Hebron, Ramallah, Nablus and Jenin calling for this cowardly regime to end and for Mr Abbas and his thugs to leave. Yet, where is Mr Abbas? He is on his travels again. As if nothing has happened. The ‘President’ of the Palestinian Authority is in Istanbul meeting with the Turkish President, trying to hang on to power. Not only this, but the new American Administration has just despatched a lowly member of the State Department, Mr Hady Amr, to waste yet more of our time trying to revive the dead as a doornail, Two-State Solution. 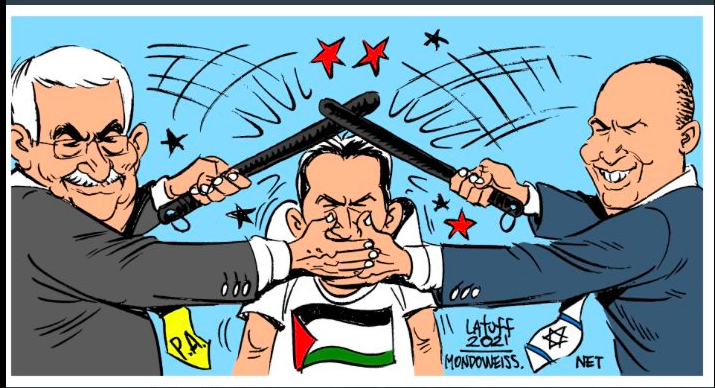 The Palestinian Authority and its leader are not mandated. They do not speak in our name and do not have our blessings. They have become the enemy within. Time for them to go. The sole custodian of Palestine is the Palestinian nation. Not the PA. Not Hamas. Not the Arabs. And certainly not America or Israel.