In Honor Of Our Tenth Anniversary 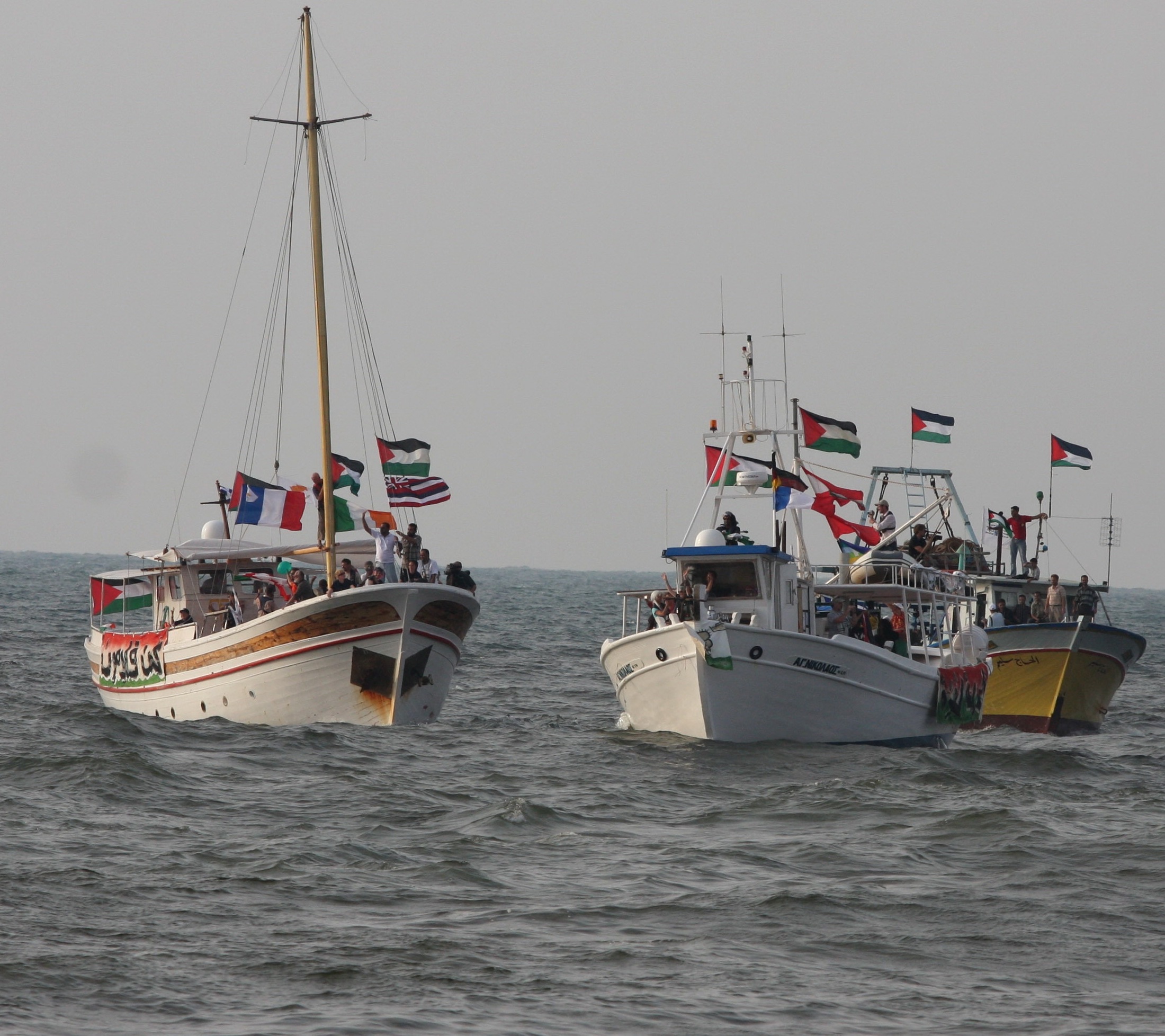 Ten years ago, we successfully landed and for one shining moment (actually four more), the people of Gaza felt the world paid attention. Here are two tributes to that day. The first is from Kathy and Courtney Sheetz to the music of Roger Waters. https://www.youtube.com/watch?v=IAOBUlkJ6i0&feature=share

Jamal M. El-Attar’s description of the day we landed is below.It’s also in our book, Freedom Sailors, https://www.amazon.com/dp/B008Y65TSA/ref=dp-kindle-redirect?_encoding=UTF8&btkr=1

The sun was shining on August 23, 2008, and everyone in Gaza was waking up in order to get ready for the D Day. It is the day everyone in Gaza has been waiting for a long time; a day we will feel like there some people in the world who care for our suffering. A day we will feel that we belong to the human race, and our brothers and sisters in humanity care for our daily struggles. Scouts from different scout groups had signed up to be in the welcoming committee on the fishing boats. So, we headed directly to the main port of Gaza at 08:00, and, together with policemen who are there to secure the crowds, we boarded the boats and started the trip to the open sea. Hours of waiting in the boats made everyone seasick, and, by noon, most of our hope flew away with the wind. It looked like the two boats were not coming. We were screwed. All the dreams and feelings that there was someone who cared for us got smaller and smaller as time went on. Jamal El Khoudari (the coordinator for the campaign) spoke at a press conference that the boats had gotten lost and made some excuse. I and the other scouts in Gaza did not want to listen to excuses. The people of Gaza wanted them here now. The smiles that were on every single face by the morning, the joyful people in the port waiting at sunrise, and the hope of seeing someone who would care for us changed to a huge disappointment. By noon, nearly everyone had left the port and gone back home. On the way back home, I saw Gaza looking darker than ever, and a small tear escaped from my eye. ‘‘It looks like there is no one who cares for us,’’ A boy scout told me. I opened my mouth to tell him that this wasn’t true, but I could not find a word to say. Just like all the scouts, I went home, took a shower, and tried to rest after a long day under heavy sun. All of us were seasick and sick in our hearts as well. I lay on my bed to sleep and forget about humankind. I set my head on my pillow and thought. “We are on our own, and nobody cares.” Then my mum came to my room with a smile on her face, ‘‘Jamal, the boats are visible on TV.’’ Mum said. So I jumped from my bed and asked her, ‘‘When?’’ She said, “It is just breaking news.” I can’t remember how, when, or why I found myself on a bus going back to the port with the scouts. I can’t remember how we managed to be together again going to the Port of Gaza. We all jumped on board different fishing boats and sailed to the open sea again. There, on the horizon, I saw three elements: A beautiful sunset, the SS Liberty, and the SS Free Gaza. On the east side of the Port, more and more people from Gaza were gathering. This time, their disappointed faces were not there. We could hear the people laughing high and delighted as they strained to catch sight of the boats. In a couple of minutes, those of us on the fishing boats came closer to the Free Gaza, and I saw the peace flag hanging up, and Maria Del Mar Fernandez waving a Palestinian flag and shouting. Suddenly, I saw many kids taking off their t-shirts and jumping into the sea, swimming to the Free Gaza. My small boat got me closer to the boats, and as my feet touched the deck, it gave me a shock. My mind was blown away as I forget every single suffering I had in my life under Israel’s blockade. I moved over to someone who was so calm and a bit away from all the media. ‘‘Hey, welcome to Gaza.’’ I said with a smile. I kept repeating these words and getting happier with every handshake. By the side of the cabin, I saw a muscled guy with Tattoos on his arms and a nice cap. ‘’Is he the captain?’’ I wondered. After shaking his hand, I kept speaking to him, and within moments, we became friends. He was this nice Italian guy who had left Italy searching for justice and truth whose name was Vittorio Utopia Arrigoni. I shared the Palestinian flag with him, and we started waving to the media and the tens of thousands of people who came to see the boats in our small port. For a short period, the boats orbited the port; then it was time to evacuate the boats and to greet our guests on land in Gaza. We scouts stood in a line and saluted the new Palestinians who had come from across the globe with one message, ‘‘Stay Human”. I will never forget all the small and big hands that came out from the crowds to shake hands with the activists. I can’t forget how tanned the people were after that very long waiting day in the port, but also I can’t forget the spirit in the crowd after those heroes landed on the shore. I remember I went home that day with a charged battery for life and hope. The two boats weren’t necessarily bringing supplies to the people of Gaza, but they brought what is more important, They brought enough hope for over 1.5 million people who live under the blockade that someday we would be free.