For the next posts, we will be honoring Hedy Epstein, Scott Kennedy, Sister Anne Montgomery, Darlene Wallach and Vittorio Arrigoni, our fallen heroes. May they rest in the heart of the Palestine they all loved 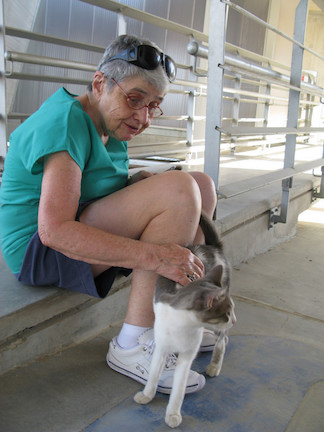 Hedy in Cyprus as we all waited for the boats

In 2007, when we asked Hedy to join us on that first voyage to Gaza, we told her she needed to know how to swim. Two days later, she sent us an email, “Am in swimming class at the local YWCA. Am determined to learn how to swim.” She was 83.

That summer, Mary Hughes Thompson, Alison Weir and I went to the occupied West Bank with Hedy. While in Hebron, she talked to one of the Israeli jailers forcing Palestinians to stand in line at a checkpoint to go home or school.

“Why are you here?” he asked. “Because I’m watching you and how you treat the people who live here.” Hedy replied “No one is allowed on Shuhada Street (the street where illegal squatters live)” “Well, we are here and we’re watching you and we’re not going away.”

I watched this exchange in some trepidation, since we didn’t want to be kicked out of Hebron or arrested. But Hedy was determined to make the point we had every right to be there.

“I’m Jewish, and I’m telling you I have every right to be here.” “Jews aren’t allowed on this side of Shuhada Street. You need to leave. How did you even get in here?” He yelped. “You let me in through that checkpoint and I’m not leaving. You didn’t ask me what my religion was.”

For a half hour we waited, while this Bantustan bully called his superiors and asked them what to do. We knew the army couldn’t arrest us, but the police could. Sure enough, a police van rolled up to the checkpoint, and two policemen stepped out as they walked to Hedy, who was sitting on the curb with Mary and me.

“You have to leave. If you don’t leave, we will arrest you.” “I’m not leaving. I’ll leave when we’re good and ready to go. So you can just sit in your patrol car and wait until then.” And she pulled up to her formidable 5 feet and stood directly in the path of this fat, 6 foot man.

And they did. When Alison finally joined us an hour later, we casually got up and walked through the turnstyles of the checkpoint, Hedy proudly walking at the front.

And that is the Hedy I will always remember. She never made it on the first trip to Gaza with us in 2008, because she became ill while waiting for the boats to come (they arrived almost a month late), and it was one of the biggest disappointments of her life. She was finally able to go on board the US Boat to Gaza in 2011 even though we were stopped just outside the 7 mile limit of Greece. But at 87, she was not going to quit trying to get to Gaza. 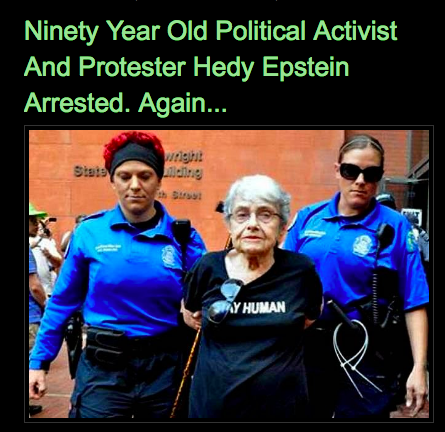 One of the last demonstrations she ever attended was against police brutality in Ferguson, Missouri. At the age of 90, she was arrested again.

She was the epitome of an activist for justice. When she died in 2016, we lost a lioness, a tiny woman with an outrage at injustice that carried her around the world speaking against Israeli terrorism of occupied Palestinians.

She will be missed by all of us who knew her, worked with her and admired her. There will never be a replacement for women like Hedy Epstein, and that is probably a good thing, because US law enforcement and Israeli occupation thugs could not handle another Hedy Epstein. May you rest in power, dear friend.