The Sixth Breaking of the Siege

The Ramming of the DIGNITY

In response to the Israeli massacres in Gaza at the end of December 2008, the Free Gaza Movement sent the Dignity on an emergency mission of mercy to besieged Gaza. Aboard the ship were over 3 tons of medical supplies, 3 surgeons intending to volunteer in hospitals and clinics in Gaza, Dr. Elena Theoharous, a member of the Cypriot Parliament, and Cynthia McKinney, former U.S. congresswoman and Green party presidential candidate.

On December 30, the Dignity was attacked by the Israeli Navy at approximately 6am (UST) in international waters, roughly 90 miles off the coast of Gaza. Several Israeli warships surrounded the small, human rights boat, intentionally ramming it three times. According to ship's captain Denis Healy, the Israeli attack came, "without any warning, or any provocation." 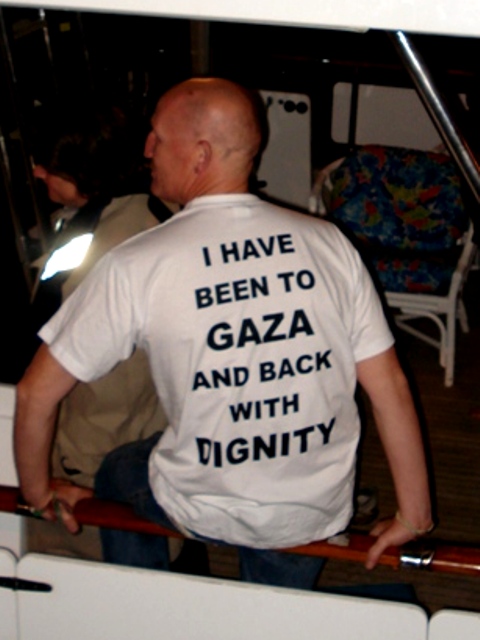 Thanks to the heroic efforts of its captain and crew, the ship was able to stay afloat, and made its way to safe harbor in Lebanon without the loss of life.

Also on board was Caoimhe Butterly, our Gaza co-coordinator, who stated that, "The gunboats gave us no warning. They came up out of the darkness firing flares and flashing huge flood lights into our faces. We were so shocked that at first we didn't react. We knew we were well within international waters and supposedly safe from attack. They rammed us three times, hitting the side of the boat hard. We began taking on water and, for a few minutes, we all feared for our lives. After they rammed us, they started screaming at us as we were frantically getting the life boats ready and putting on our life jackets. They kept yelling that if we didn't turn back they would shoot us."